A week ago we saw the award ceremony that brought to a close the seventeenth edition of the 2018 Modena Cento Ore, one of the most spectacular rallies in the GTO Engineering calendar.

Following, eleven special stages on closed roads, four race circuits and four city finishes, the four-day rally concluded in Modena. In all, over 600 people were involved from the participants themselves through to the organisers , officials, timekeepers and photographers en-route. 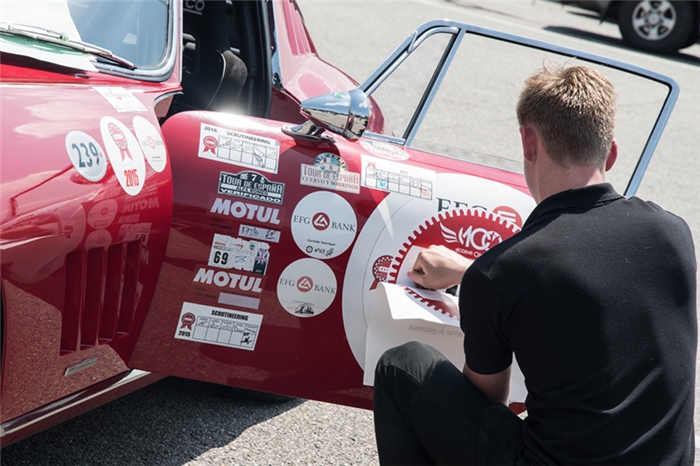 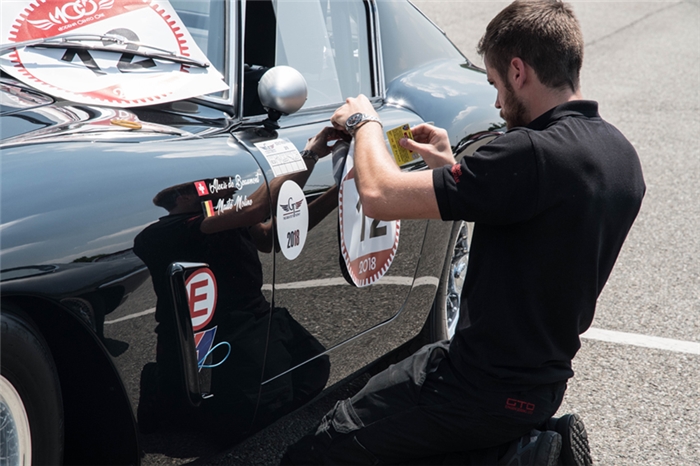 GTO Engineering were represented by our own workshop team; with Kevin and Lee Jones in their #78 1972 Ford Escort RS1600, as well as, supporting three client entries; with Tom and Dan supporting Dennis and Charlot Singleton in their #16 1965 275 GTB and Alexis De Beaumont and Maïte Moline in their #12 250 GT SWB and Chris supporting Herb Wetason and Olga Neulist-Reindlova in their #83 250TR. In addition a regular sight at GTO engineering was participating with Robert Wadsworth and Alstair Oxley in their #71 Lancia 037 Stradale.

With the rally starting at the famous Monza circuit in the sunshine, the stage was set for these iconic cars which, for the first time, were split into two on the pre-66 grid into a disc-brake class and a drum-brake one, both of which would prove to be fiercely contested.

In the disc-brake class, the #39 Ford GT40 and #6 Shelby Cobra Daytona Coupe were trading stage times and dominating the circuits. Winner of the last four years Philip Walker and Miles Griffiths in their #1 Jaguar E-Type were not really in contention for the win until the GT40 pushed too hard and had a significant off that ended their event. The next few stages combined with pressure saw the Daytona Coupe fall backwards into the clutches of Philip Walker who for the fifth year running, walked away with the trophy.

The post-66 grid also saw fiercely-contested battles throughout that included seventeen Porsche 911's, a single Lancia Statos and Kevin and Lee in their Escort RS1600. The first race saw the Escort ninth on the grid with #56 Glenn Jannsens and Tom De Geetere in their Porsche 911 SC on pole and the LM Daytonas also at the sharp-end.

At lights-out it appeared everyone was asleep and by the third corner the little Escort was first. Over the next six laps Kevin was staring in the rear-view mirror with only the 911 'SC' of Glenn managing to get by.

The second race at Verano saw Glenn Jannsen second as he suffered a penalty for reversing on the pit-straight at Monza when he over-shot the start. Max Girado in his #70 Lancia Stratos was on pole with the Escort starting third. Another 'heavy night-before' start meant that by the exit of the first corner the Escort was first again, and for a brief moment in the overall lead of the rally.

However, an over-exuberant #57 911 decided to swap paint with the Escort and spun the car off with only one lap remaining. The meeting in the pitlane afterwards was heated but all's well that ends well with apologies and a 30 second penalty being handed out to them!

Stage times were traded between the Escort, Stratos and the 911's. Meanwhile, 2017's 2nd place #51 Ferrari 308 of Chris Wilson and William l'Anson was finding the armco barriers on the hillclimb slightly harder than the wings of the Ferrari.

By the third day, it was clear it was a three-horse race however. Glenn's 911 could clearly outpower the Stratos and the Escort on both the hills and circuit straights. At the end of Day 3, Max did a full 360 degree spin in his two-year restoration Stratos on the narrowest road seen outside of Cornwall and missed everything by mm to fight another day. However, on the very next stage he was not quite so fortunate and re-arranged the rear of the car over the finish line!

On the Friday night, the Escort had a gearbox failure. With a replacement box found locally it was fitted in the car overnight only to find third gear was missing! At the much-loved Muguello the next morning, once again from third on the grid the Escort led with no third gear and tyres past optimum and a dog-fight ensued with #54 James Cottingham in his 1973 365 GTB/4 Daytona.

The Daytona.made a 'do or die' move around the outside of a sideways Escort and came off worse, but everyone survived to tell the tale. The rally finished with Glenn Jannsens in first, Max Girardo and Elio Baldi in second and six seconds further behind Kevin and Lee in the RS1600.

Meanwhile in the GTS12 class, Dennis and Charlott Singleton in their #16 1965 275 GTB had a trouble-free week and ended up a very respectable 34th overall.

In regularity, Herb Wetason and Olga Neulist-Reindlova in their #83 250 TR. thoroughly enjoyed themselves and completed another faultless 832km.

Alexis De Beaumont and Maïte Moline in their black #12 250 GT SWB finished their first ever rally together, Maïte having never navigated before, with a fabulous result. Alexis getting out of the car like he'd completed a triathlon, while Maïte looking as fresh as a daisy despite the temperatures.

The first days drive through Monza and Milan will, alas, never be repeated and Luigi, the organiser, understood the frustration from the competitors with this very thought.

Gus, from RM Auctions, in his #24 Jaguar XK120 was livid with himself on the final stage, whilst leading the Index of Performance category, mis-read the instructions and did not complete enough;laps of the final circuit handing victory to a very popular Martin and Susanne Halusa in their #20 Ferrari 212 Export.

The Halusa lads, Lukas and Andreas, in their #33 Alfa Romeo Giulia Sprint GTA were waved to by Kevin and Lee earlier in the day when they shortened their car against the barrier in one of the stages.

Robert Wadsworth and Alastair Oxley in their #71 Lancia 037 Stradale were plagued with electrical gremlins throughout the week but got it sorted for the very last stage, look out 2019!